Bulls hate the colour red, swallowed gum stays in your body for seven years, lightning never strikes the same place twice. These are just a few examples of myths that have been said so often that people have come to view them as facts.

The world of performance management is full of myths. Here at Advanced Clear Review we sometimes refer to them as “corporate rituals” – things organisations do because they’ve always done them before, based around some flawed centralised flawed assumptions. In this article we’ll take a look at some of the most common performance management myths.

Performance Ratings are a useful tool for measuring performance

Probably the most common myth we come across in the performance management world is the idea that performance ratings are a useful tool for measuring performance.  We have this conversation with HR professional almost daily – for years, many companies have invested a lot of time and energy into programmes which feature performance ratings, based around the belief that managers can assign a rating to employees in a fair way.

The issue with this approach is that humans are intrinsically biased, and – it turns out – when they’re asked to rate other people, their ratings are actually much more about them than they are about the people they’re rating.  Studies have shown that as much as 61% of a performance rating is actually about the rater, not the ratee.  Different raters rate in very different ways, so what to one person will appear to be great performance could well appear to another as average performance.

This phenomenon – the idiosyncratic rater effect – is one of the key reasons why many performance management approaches are felt by employees to be unfair (spoiler alert…it’s because they are!), and why many companies fail to achieve their actual aim of measuring performance.

I should plot my employees on a bell curve

The issue with this approach is that this is simply not how individual performance works.  Again, the science is clear: performance follows a Paretian (or Power Law) distribution, not a standard (bell curve) distribution.

If you want to know more about what this means for your process, take a look at the pitfalls of plotting employees' ratings on a bell curve blog. 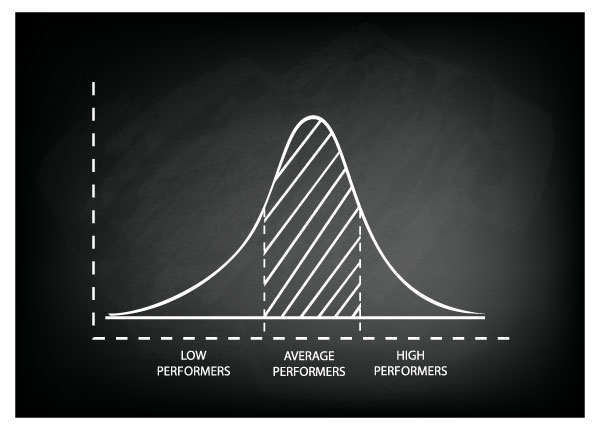 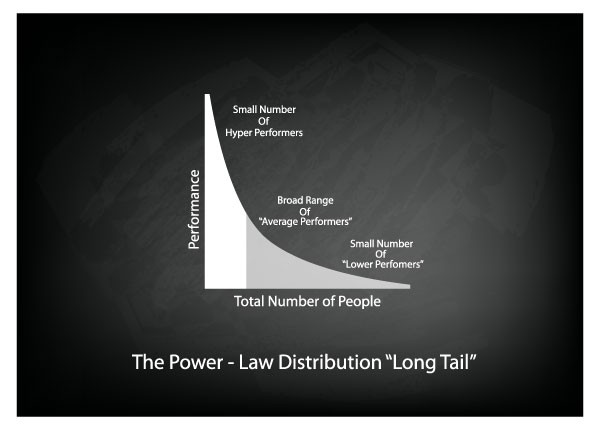 Many organisations invest heavily into tools which track the time employees spend on specific tasks and responsibilities.

An article by work place psychologist Ian MacRae points out the damage surveillance can have on employees’ performance. Whilst organisations might think the best way to improve performance is by showing staff they are being closely watched, Ian explains ‘when surveillance is excessive it can lead to employee stress, distrust of employers and lead to suspicion within teams and within the company…. Intrusive and pervasive surveillance can be bad for motivation and consequently, performance.’

In previous blogs, we have talked about the critical role of work engagement in productivity. Excessive surveillance is essentially digital micromanagement, and can have negative impacts on employee well-being, diminishing employee autonomy, and consequently employee engagement and performance.

Surveillance tends to focus on reducing negative behaviour, but there are two limitations to this:

We can see how this is relevant when it comes to rating staff. Simply identifying a person as a good, average, or bad performer, or giving them a number on a scale without reference to performance management criteria and workplace objectives, does not help to improve a person’s performance. If a manager is sitting in front of an employee once or twice a year and stating ‘You are a 3 out of 5 on our performance scale’ this isn’t doing anything to improve or drive performance.

You are simply showing the staff member their performance is being watched and hoping this will make them perform better.

This doesn’t work. You have not given that employee anything useful or tangible to work on, and simply knowing they are being watched will not enable them to perform better. A more useful conversation would be ‘You are performing well, but there is room for improvement, lets discuss some of the ways we can support you with this.’

We’re not going to tell you to throw away the 9 box grid all together (in fact, we’ll be releasing a couple of templates to enable you to build them using Clear Review data soon) - they can be a useful tool when used correctly, but all too often we see people using them inefficiently. Asking managers to use a 9 box grid to plot their employees, and using this to try assess performance companywide, is unlikely to wield any useful information, for two key reasons:

The 9 box grid should be used to plot the trajectory of an employee’s performance and potential in the organisation, and should involve the employee’s input to do so, looking closely into their level of ambition, ability and whether they see an opportunity to move forward within the organisation.

When used well a 9 box grid can be a useful performance management tool to help drive internal mobility, the principal of mapping people this way is good, just as long as it’s handled well and the criteria used are valid and reliable predictors of performance and potential.

I need to know the performance levels of all my employees

Is there really much to gain by delineating minor differences in performance between one employee and another? This is an overly complicated process and doesn’t give your organisation anything useful.

Moreover, performance is relative, trying to compare someone in payroll team to someone in sales is meaningless, as they perform differently, but not necessarily better or worse than each other.

Instead organisations need to know who their top performers and high potential employees are, so they can take steps to nurture and retain them, and ensure managers are spotting the underperforming employees during reviews so steps can be taken to improve their performance or discipline them as needed.

So whilst some tried and tested words of wisdom have stood the test of time for good reason, we’d warn you against following rule of thumb simply because it’s widely practiced. Ask yourself what your organisation is trying to achieve from this, and whether what you are doing is benefiting your employees or not.

Nick is a Talent Management specialist, who has spent his entire career working with organisations looking to transform the way they hire, develop and manage their people. He works with our HR software customers, providing specialist consulting and advice around all aspects of the Talent Management lifecycle, helping them to deliver their strategic people aims.