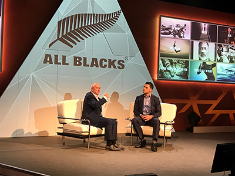 No British business can rest on its laurels during such volatile and uncertain times. For us at Advanced, our ambitious growth plans have been well documented and we’re proud to report year on year growth over the last few years. But that doesn’t mean we haven’t had to dig deep and keep focused to achieve these results during such complex times.

Taking time out to celebrate the wins is really important. And that’s exactly what our annual Best Practice Sharing Summit (BPSS) conference that took place this week aimed to do. It enabled us to rally the troops, regroup with a new concerted effort and leave feeling inspired to achieve the goals for our financial year which is to build on improved customer satisfaction and faster technology innovation as well as support our organic growth with complementary acquisitions.

For me, it’s all about teamwork – how to create the right team mindset and ensure this propels us to continue to evolve as a winning team. Therefore, who better to inspire us with a keynote speech than Doug Howlett, the record-breaking winger from the All Blacks rugby team, he is currently the seventh-highest try scorer in rugby union history and first on the all-time highest try scorers' list for the All Blacks with an incredible 49 tries in 62 tests.

There’s little doubt that the All Blacks are synonymous with success. As the best winger ever in the rugby world, who represented the best sporting team in the world and undisputed winning team, Doug enlightened us with some of his top tips to create that winning mindset.

To provide some perspective, when Doug was playing with the All Blacks during 2000-2007, the team had a win ratio of 86%. Across its history, the team has a whole win rate of 76% – an incredible achievement.

When considering the reasons behind his success, his over-riding message was the importance of teams and collaboration. Whether we are in the world of sport or not, his point was that we are all part of multiple teams – work, businesses, supporters, family, friends and gym buddies. All of these teams require you to be the best you can be and, to get there, we have to work closely and better together to get the best out of each other.

The sporting world has dealt with this for a very long time, where they are forced to work together in teams. As Doug explained in his keynote, as a winger, he was on the edge of the pitch. For him to do his job, there were 14 other team members that he relied on to do what he needed to do and finish the job with a try.

So here are Doug’s nine key points which, I believe, can inspire all of us:

Doug’s insight really is refreshing and, for me, it’s also about creating an environment that people can flourish and deliver great results. And we all have to dig deep at times – especially in the current climate. It’s also about embracing the best talent and keeping them grounded to focus on doing the best – which means taking that responsibility of not letting down your team.

It was a truly inspiring session that I believe will pay dividends over the coming months, and inspire my team to exceed the expectations of our customers, partners and their colleagues. As we work towards the collective goal of delivering technology solutions and services that make the complex simple, these golden tips will help to keep us focused on delivering the best.