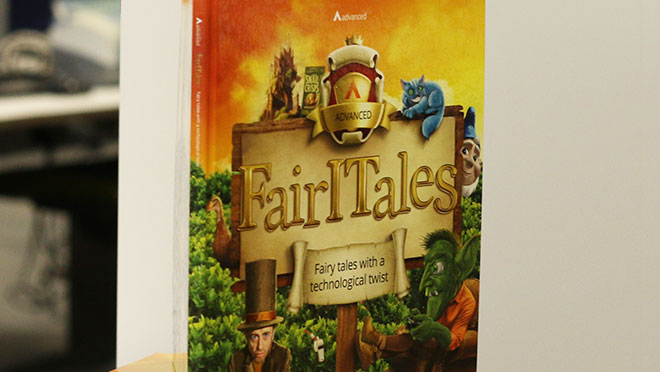 Ten young authors have turned to technology to create a modern technology twist on the traditional fairy tale which has resulted in a special book of ‘FairITales’, officially launched today in Birmingham. The book features tall tales of techy princesses, smartphone-carrying knights in shining armour, tweeting piglets and gadget-loving goblins - we’ve even got Alice in DigiLand - all of which will raise money for The Prince’s Trust.

The team from Advanced devised FairITales as part of their involvement with The Prince’s Trust Million Makers competition, which aims to raise over £1 million nationwide.

The Million Makers challenge sees businesses from across the UK competing to raise as much money as possible over six months for The Prince’s Trust. Money raised will go towards helping disadvantaged young people to turn their lives around. Three in four young people supported by The Prince’s Trust move into work, education or training.

Today’s fundraising event was hosted by Advanced, who had been inspired to create a competition inviting young children aged from six to 11 to write a creative ‘FairITale’ for the modern era, with the top 10 winning stories chosen for the book. The perfect gift for Christmas, Advanced is hoping to raise over ten thousand pounds for the charity.

Two Young Ambassadors from The Prince’s Trust attended the event, both to thank the young authors for all their efforts for the charity and to inspire more young people to get involved in future.

“As a successful entrepreneur myself, I’m delighted to be able to support The Prince’s Trust Million Makers competition. Million Makers is an excellent way to encourage new ideas whilst also raising valuable funds to help young people. The companies that take part are doing a fantastic thing, and we should all be encouraging them in whatever way possible.”

Sally Scott, Chief Marketing Officer at Advanced, commented: “Although we are naturally advocates of the benefits of technology, this doesn’t preclude us from being huge supporters of creative thinking and writing. What this collection of fairy tales shows is how important it is to continually reimagine the way in which we do things - we’ve been astounded by the ingenuity demonstrated in the stories which shows

how the fairy tale can still be very relevant to children today. These traditional tales have been transformed by these children, making them relevant to the digital era in which we live, but with humour and creativity.”

“We were overwhelmed with the take up from children and enthused when picking the winning stories. We are constantly led to believe that children are far keener to pick up a device than read a story but we hope this FairITales book challenges that opinion. Contrary to expectations, the printed book is still surviving alongside its upstart e-book cousin, and technology is helping publishers and retailers reach new audiences and find new ways to tell stories.”

The winning stories and authors are as follows:

Special thanks go to Graymatter, who donated their design skills and produced the creative imagery for the book and to Firework PR for coordinating the launch communications.

Sally was promoted to CMO in December 2015 following a track record in senior marketing positions. For 4 years now, she has successfully led the company’s transformation process.